On a first time visit to Paris, the biggest challenge you’ll face is what to choose.

There is so much to see – the Eiffel Tower, the Arc de Triomphe, the Louvre, the Champs-Elysées… how can you visit the City of Lights without missing something essential?

In truth, you cannot. You could spend a lifetime in Paris and not see everything worth seeing.

So let’s do it differently. Instead of looking at individual attractions, let’s look at essential experiences you must have on your first visit to Paris, France.

If there’s one experience everyone needs to try when visiting Paris for the first time, it’s sitting in a proper Parisian café and watching the world go by.

Whether you’re trying to recreate the bygone era of Left Bank intellectuals or simply out to gauge the proverbial abruptness of Parisian waiters for yourself, a few hours spent Paris-watching in a café is something you simply cannot miss.

Start with the most famous ones – you can work your way out from here:

Beware that many cafés are also restaurants, and prices change dramatically at mealtimes. Go mid-morning or mid-afternoon to sit and people watch at reasonable prices.

A Popular Experience: Cruise along the Seine

Paris was along the water, on the Ile de la Cité, and the best way to get a sense of the city is from the river that slices through it: the Seine River.

Even if you’re not much of a cruiser and this feels a bit touristy, do it once, and do it early in your visit: this is the best way to discover Paris for the first time.

Many of the city’s best attractions are along the water, and you’ll float by everything from the Eiffel Tower to the Musée d’Orsay and the Grand Palais, all the while passing under the city’s legendary bridges, like the impossibly gorgeous Pont Alexandre III.

A number of companies offer Seine cruises, which typically last an hour, unless you’re on a longer dinner cruise. You can catch boats from several points, depending on the company:

These are among the most popular but by no means the only ones.

If you’re traveling in the high season, make sure you get your tickets ahead of time, and confirm your departure point, because each company’s boats leave from different wharves.

The beauty of Paris is its organization into neighbourhoods. Some of these have numbers – from 1 to 20, called arrondissements – while others are better known by their names: the Marais, Pigalle, Belleville… and of course, Montmartre, possibly the most famous of all.

Once a village of its own, today Montmartre is part of Paris, even though it still retains that village feel. You may sense some déjà vu here, if only because the area has been photographed so often you are bound to be familiar with some of its more popular corners.

There are plenty of walking tours of Montmartre, and you can either indulge and take a tour, or you can simply wander, heading uphill with map or app in hand.

You’ll of course see the Sacré-Coeur Basilica (which you can also access by funicular), watch the portrait painters on the Place du Tertre, follow in the footsteps of Amélie Poulin, or embrace the artistic vibe that has been part of Montmartre since the 19th century, the same vibe that so attracted the likes of Renoir, Matisse and Toulouse-Lautrec.

At the foot of Montmartre is the Moulin Rouge, the famous (adults only) cabaret revue where the French can-can was invented.

Advanced reservations are now required for many of Paris’s museums. Plus the timed entry and skip the line passes are invaluable for such popular European cities!

Paris has more than 200 museums and many of them have world-class reputations.

Visiting Paris for the first time means heading to one of them (one at the very least!) but each offers you something different, so again, you’ll have to make difficult decisions.

For a bit of fun, you could try one of the more unusual museums in Paris, the tiny Museum of Counterfeiting, for example, the Arts et Métiers for industry and inventions, or the Musée des Arts Forains, or Fairgrounds Museum.

Advanced reservations are now required for many of Paris’s museums. Plus the timed entry and skip the line passes are invaluable for such popular European cities!

You could eat your way through Paris for a year and still not taste it all, but while you’re here, some things – macarons from Hermé or Ladurée, for example, or hot chocolate from Angelina – are things you have to taste at least once.

Parisian breakfasts aren’t particularly sexy – usually a slice of baguette with butter and jam spread lightly on top – but what you must do is grab a coffee and delicious croissant at least once during your stay. Stand in line at a boulangerie just like Parisians do.

Of course you can have lunch in a restaurant, but why not save that for dinner and do something a bit different at midday?

A very Parisian experience is to grab the makings of a picnic from a grocery store or food market and go eat it along the Seine. You’ll hobnob with plenty of Parisians grabbing a few rays of sunshine, armed with their jambon-beurre, a baguette filled with butter and ham.

And yes, you can bring your bottle of wine and drink it with your picnic but beware, rules are getting stricter and in quite a few areas, glass bottles are no longer allowed.

For a light lunch, head for the nearest crêperie, where you can have a thin French pancake with a savory filling to start – like cheese or ham or mushrooms – followed by a sweet one stuffed with fruit or jam for dessert.

Top it all off with an ice cream cone from Berthillon, which you’ll find scattered throughout Paris.

If you’d like to try some typically Parisian specialties, a food walking tour is the best way to explore the culinary secrets of Paris if you’re not familiar with the capital.

They may sound dark and lugubrious, but the Catacombs of Paris are fascinating, full of surprises and history.

Paris already has an amicable relationship with its dead, as you’ll see if you visit the famous tombs of the cemeteries of Père Lachaise (like Jim Morrison or Edith Piaf) or Montmartre (some of France’s most famous writers).

But back to the catacombs. Yes, they are wallpapered with the skulls and bones of six million Parisians, but the history of Paris is etched into these underground tunnels.

Used as quarries ever since Roman times, the first bones were transported to the catacombs in 1786 and this would continue for nearly a century, until the ossuary was too full to take in any more.

The feeling is more one of cool and quiet rather than of death, and Parisians being Parisians, many an unauthorized party has taken place in the catacombs’ hidden corners.

This may be a relatively unusual thing to do on a first visit to Paris, but seeing something unusual should be part of the Parisian experience, even if it is your very first time.

Comment: What other tips do you have for first time visitors to Paris? 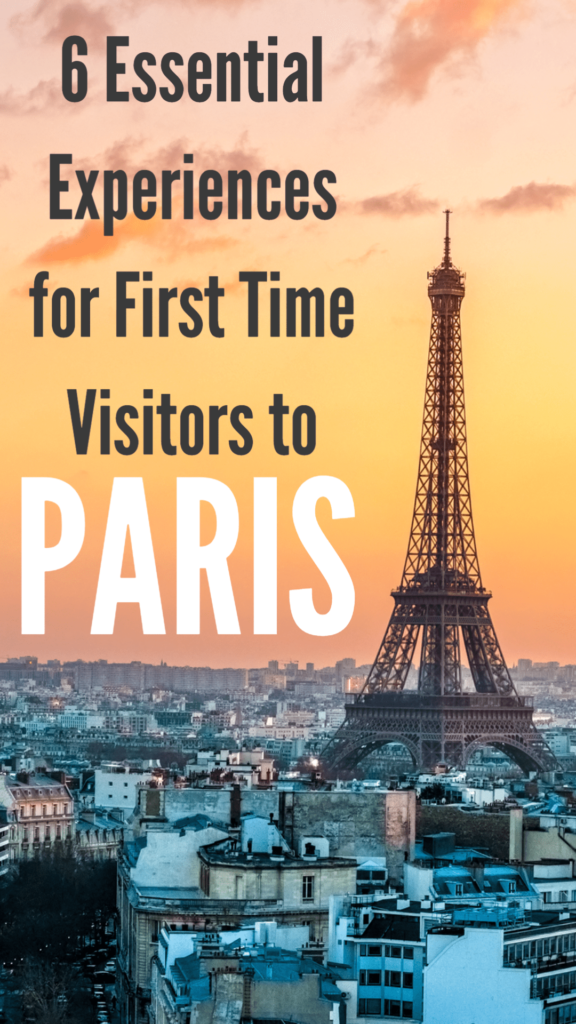